Welcome, guest, you can Login or Create an account

Remote control for Wii and Wii U in white 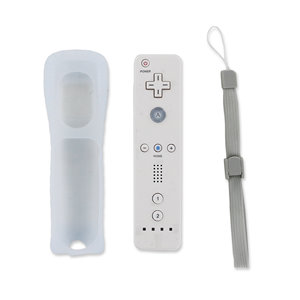 Excl. tax
Not yet rated
Add your review

Remote control for Wii and Wii U, without Motion Plus function, in white.

Add to wishlist Add to comparison

It is time to give up the traditional controller with two-hand control and get started with a brand new control system from the loose hand. This controller lets you run, jump, spin, slide, shoot, steer, accelerate, bend, kick and throw in a way you have never experienced with this controller.

Why press another button when you can simulate the same action faster with a movement? When you point this wireless remote control at the screen, a lightning-fast moment of interaction is created in which movement, depth, positioning and direction are directly determined by movement of the controller. The motion sensor registers every movement you make and therefore gives an extra dimension to every game. The Remote can be a sword in one game, to serve as a steering wheel again in a racing game.

This controller does not have a Motion Plus function, but a separate Motion Plus module can be plugged in here. This controller can also be used for Wii U for which no Motion Sensor function is required, the buttons on the controller are sufficient for controlling this console.

0 stars based on 0 reviews Add your review

Wireless Controller for the Wii U Black

Remote control for Wii and Wii U, White